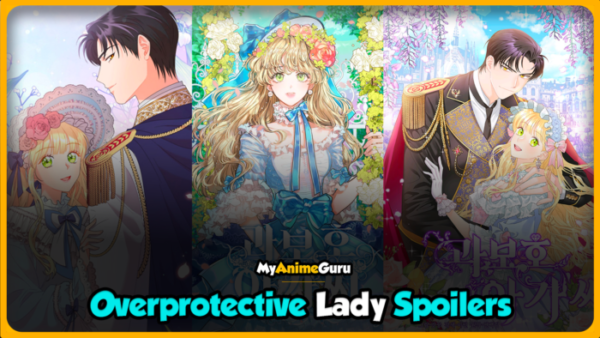 Overprotective Lady is an Isekai Romance manhwa and webtoon and it is quite popular.

MyAnimeGuru brings you an article on Overprotective Lady Spoilers which will uncover everything you want to know about the webtoon.

The spoilers have been curated by the fans and readers of the manhwa and you can enjoy them without any doubts.

So, let’s get started with our article on Overprotective Lady Spoilers.

Archduke Rahan El Kanox has been criticized for saying, ‘It must be a demon sent by God to wreak havoc on this world.

A young woman who grew up beloved in her family due to the wounds of her childhood, one day receives a proposal from the fearsome Archduke Kanox, whom she had only heard of through rumors.

Despite his family’s opposition, Isel decides to marry Archduke Kanox for the sake of the family. The person who appeared before her was a kind and wonderful gentleman who helped Isel in danger in the village.

Then Isel could not understand the infamy of the many who followed Prince Canox. ‘For a person who is so kind and kind… Why is everyone doing this?’ 과보호 아가씨 Miss Overprotected

Read Also – If You Remove The Kind Protagonist Mask Spoiler

He was close to losing the will to live, however, due to his children, he decided to do all he can to stay alive and safeguard them as they’d be alone in the event of his death.

He is deeply regretful for not being able to safeguard Ishel as she was a young girl and due to his regrets, he’s kept her in the house so that she won’t be injured again.

Brother- Leo Bliss-Is a big sis con. He like his father was unable to stop Iselle from being abused and as a result of this has become too protective of his sister after he realized how severely the trauma had affected her.

FL-Iselle Bliss- The youngest and sole child of Count Bliss her mother passed away at a young age and she can recall a vague memory of her.

She is a very caring and beautiful being. and gorgeous! She is not convinced by the stories that Rahan is an egomaniac who fights for his life and believes Rahan is unfairly being judged and believes that these stories hurt him emotionally and she is protective of Rahan.

Around the age of 10, she was molested by Duke’s Recion heir Cesar Recio. Her age currently is 18-22.

Butler Theodore He has been helping the family of the count since Iselle was a baby.

Alec Cairns- overprotective of the woman is a crying baby

Harris Hamel- is more distant He was a knight during some of the MLA’s military campaigns. He ended up at the Bliss home as a knight, and everyone else in the Bliss family is very protective towards the woman.

Ekkar Empire was a nation where gods were worshipped

Terrorist Emperor Ekarr– The Emperor of the Ekarr empire due to the power of Duke Recion at the time of the attack, the emperor was unable to investigate the issue and instead was required to cover up the incident that occurred when Cesar Recion raped Iselle.

Crown Prince Sion de EkarrSion De Ekarr is known as a “flooding love” after meeting Iselle briefly in her master’s workshop for sculpting.

He was in the Erenium Academy studying sculpting and generally trying to figure out ways to avoid becoming an emperor. He quit and decided to become the emperor to have the chance to remain with Iselle.

M- Grand Duke Canox- Rahan El Canox– The first time he met Iselle at Herbart Forest. Herbart Forest Iselle had been playing with a bunny, and they became close due to their identical name, and also because she claimed that his eyes were like one of the sunsets (for all his life, he was averse to his eyes with red ones).

He gradually grew accustomed to Iselle and fell in love with her due to how adorable Iselle was. He even called her a fairy. He continued to see the girl until she vanished.

After he was in the Veritas academy, he would sneak off to look for her until he finally went to fight. Since he was part of the Canox family that belonged to the Grand Duke Canox He piety the God Carmus just as they do since the beginning of time.

He decided to leave his family and hide in the house which was the property of the Duke of Canox (Rahan). In the end, he was Iselle’s teacher of sculpture. He wore a cross-dressing outfit to make it difficult to locate his identity.

Veritas Academy– A prestigious school that admits aristocrats of high rank and is focused on swordsmanship and scientific research.

Pope Liante Anise– The pope of the people who believe in the goddess Enix She has the most powerful spiritual power of all worshipers of Enix.

She is extremely self-centered and conceited and a bit antagonistic to ML since at first she believed that she was cursed. She begins to change her ways after spending time with Iselle.

Noh Shin-Kwan Was the priest that offered Rahan an oracle known as the “cursed” oracle.

God Carmus-is the god of War.

Goddess EnixGoddes Enix is Goddes Enix, the God of protection, healing, and peace.

Duke family
Duke Recion the majority of power in the mining contract that was signed by the Barmule mountain, and employed it to conceal the fact that his son molest Iselle peacefully.

Cesar Recion– He is the Duke’s successor the man who molested Iselle and is obsessed with sexy her.

Rekkusis a close friend of Sion Prince Sion. He was a genius at sculpting and was enthralled by Sculptor L’s works.

It is a happy ending and ML Rahan, as well as FL Iselle, end up getting married, after some moments of ups and downs.

Although Rahan has doubts about himself often throughout the film he doesn’t try to end their marriage and there’s any “we can’t be together because of this”.

Rahan spends every moment in the company of Iselle and even has her father and brother riding on his back.

Iselle discovers that she has fallen into love with Rahan at a very early point in the story, probably around chapter 30, I think perhaps earlier.

She always tries to convince everyone that Rahan is the complete opposite of what people think and that he’s very loving and gentle.

No one believes her and they constantly claim that she is not the case since they observe that he only alters when he’s with her.

Rahan was always with her and protecting herself from Cesar Recion. He also assisted her in overcoming her fears of this piece of SCUM.

After the middle tale Recion helps Cesar as well as the Recion Dukedom by proving that the Duke had snatched money from the mine by selling the mine to empires of others.

Recion also managed to discredit his Recion Dukedom by inventing neat documents showing they were using the money to purchase troops of their own (a falsehood to further demonize the Dukes).

When Emperor Terban was confronted with the evidence and he swiftly sentenced the Duke to behead and sentenced Recion to life imprisonment.

The Emperor was aware that his son, Grand Duke Rahan had forged a few things well, but since he was determined to rid himself of Duke Recion He ignored the evidence.

That was all for our article on Overprotective Lady Spoilers and I hope you enjoyed them. Let me know in the comments what you want next.

You can also get in touch with us on social media.