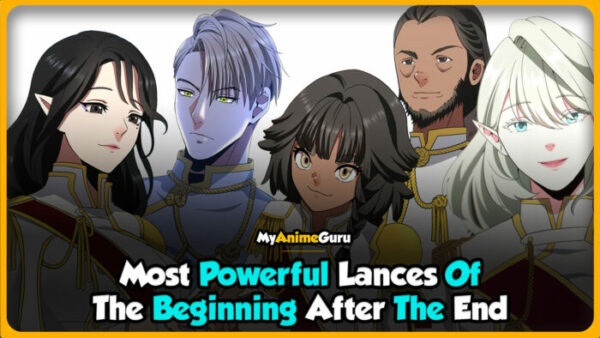 The Beginning After The End is fantastic and one of the most popular manhwa. When it comes to popularity and rankings, it comes next to Solo Leveling.

MyAnimeGuru brings you an article on the 7 Lances Of The Beginning After The End. We will talk about the Lances, their powers, and their background.

All the information has been collected from verified sources and manhwa readers so rest assured.

Let’s start with the introduction of the Lances.

Who Are The Lances In The Manhwa?

A group of gifted people chosen by their kings forms the Lances. All lances work under their king and carry out their orders only.

They swear allegiance to their rulers in exchange for receiving a potent artifact. These artifacts were all bestowed by the gods (Arsuras) to safeguard their respective races.

This item was obtained by everyone in the silver core level in order to advance to the white core stage.

History Of The Lances Of The Beginning After The End

The three races each have two lances that serve to protect the kings, although the common people are unaware of their existence.

Up until the decision to construct the Council of Dicathen by the ruling elves, dwarves, and humans, they remained hidden. They collectively told the remainder of the continent about the Lances.

The lances are based in Dicathen and are governed by the Council of Dicathen. The recipients of these artifacts utilize aliases or code identities because they used to operate covertly.

The secret names are rarely used now that the beneficiaries of the artifacts have been identified as the Lances, and they eventually became unnecessary because of the war.

Members Of The Lances Of The Beginning After The End

Let us discuss these Lances and how they came into existence too.

One of the seven Lances of Dicathen, Bairon Wykes, also known by his code name Thunderlord, represents the Kingdom of Sapin. He is the Wykes Family’s rightful heir and the elder brother of traitor Lucas Wykes.

Bairon is thought to be a very somber and critical man, despite the fact that he has not been shown interacting with the majority of people.

The depth of his relationship with his family is unknown, but he takes pride in his lineage and is prepared to stand up for them, especially his younger brother Lucas if they are ever in danger.

Bairon, a white core mage with a lance, is one of Dicathan’s most powerful mages. Some of his abilities and powers are:

One of the seven Lances of Dicathen is Varay Aurae of Code Zero. She is one of the two lances that stand in for the Sapin Kingdom. She is regarded as the war’s most powerful lance.

She is depicted as having white hair throughout the book. She has grey eyes and white hair in the web comic.

Varay is one of Dicathen’s most powerful mages and a lance, as well as a white core mage.

Ice deviant: She can freely manipulate ice to form many objects, including weapons, projectiles, and barricades.

She has the ability to use ice magic to conjure an ice dragon.

Her ability to cover her body in layers of ice, which greatly increases her speed and power, makes her the “Ice Ninja.”

She taught Kathyln how to use this talent, which Arthur likens to a “Ice Ninja.” Since Arthur had the endurance to maintain his beast will form for a long enough period of time, it was able to compete and outlast him in his Realmheart form.

She has the ability to fly.

The primary protagonist of The Beginning After The End is Arthur Leywin. He was a monarch by the name of Grey in a past life before being reborn into a brand-new universe on the continent of Dicathen.

King Grey’s reincarnation as Arthur allowed for the transfer of his personality and memories, which influenced how his new personality evolved.

Because of this, he had an incredibly mature attitude throughout his childhood and youth. He frequently considered the larger picture and understood the events and their effects precisely.

Of the seven Lances that represent Dicathen, Alea Triscan of Code Aureate is one of them. She is one of the three lances who stand in for the Kingdom of Elenoir and was the first to come into contact with a Vritra.

She is capable of creating a sword made of plants.

One of the seven Lances who represents Dicathen is Aya Grephin from Code Phantasm. She is one of the three lances that stand in for the Elenoir Kingdom.

Aya’s arrogant seductiveness earned her the moniker “one of the deadliest lance” according to Arthur. Additionally, she tortures her victims with her illusions in a horrible manner.

One of the seven Lances of Dicathen is Olfred Warend, a member of Code Balrog[5]. He is one of the two lances that stand in for the Darv Kingdom.

Olfred is submissive to his superiors and has a rigorous personality. He was the only Lance to engage Arthur in brief conversation when they initially met.

Olfred strikes Arthur as friendly but also reserved. He was apprehensive of other people because he was raised without a family and in the streets. Olfred is cautious by nature, but Rahdeas has Olfred’s confidence and his unwavering loyalty.

The seventh Lance of Dicathen is Mica Earthborn, of Code Ohmwrecker. She is one of the two lances that stand in for the Darv Kingdom.

Mica prefers to speak in a juvenile tone and has a more chirpy, ditzy attitude. She also frequently refers to herself in the third person.

She behaves fun, finds excitement, and frequently giggles throughout a battle, much like a child might. Mica can’t teach because she only acquired magic by intuition. Olfred Warend makes the observation that a pebble is a better teacher than Mica.

That was all for our article on 7 Lances Of The Beginning After The End. I hope you liked the article and if you want more content like this then do let us know in the comments or on our social media.