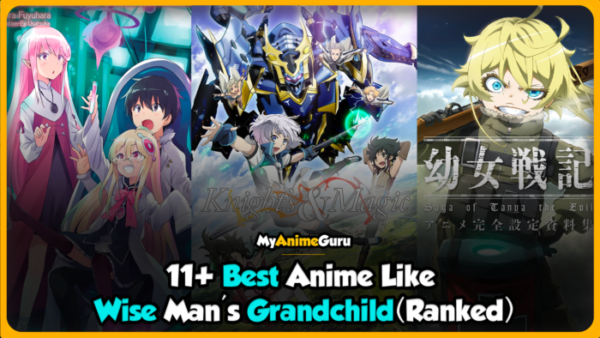 Wise Man’s Grandchild is an action-fantasy Isekai anime that has gained a lot of popularity over the past years.

MyAnimeGuru brings you the list of 11+ Best Anime Like Wise Man’s Grandchild. This list is going to be ranked based on the anime reviews and ratings given by the viewers of the show.

So, without wasting any time let’s get started with our list of Best anime like Wise Man’s Grandchild.

This is the list we have made for the best anime like Wise Man’s Grandchild. Let’s start with the discussion as to why we chose these titles for our list.

1. That Time I Got Reincarnated as a Slime

We get a terrific sense of the MC’s personality right at the beginning of the series. It’s a whimsical, enjoyable, and hilarious beginning to a new series, making it incredibly distinctive within the Isekai genre.

Additionally, you will laugh uncontrollably during the first episode’s final sequence.

As the story progresses, you can relate to the main character since each episode adds to the depth of world-building that gives you the impression that you truly are on a new planet.

The Slime may be overpowered, but due to his cautious temperament, tendency to underestimate his opponents, and affinity for relatable otaku culture, we get a feeling of his humble demeanor and love of fantasy.

Overall, one of the best anime like Wise Man’s Grandchild.

2. The Rising Of The Shield Hero

I won’t lie, I’ve seen every episode of this anime and I truly like it. I genuinely want to see the main character succeed.

I know they always do, but this time, everyone is more closely watching him. Anyway, I won’t disclose any spoilers, but if you like these kinds of anime, I recommend watching this anime like Wise Man’s Grandchild.

This is one of my favorites since it’s so unique and interesting. I liked how, despite being treated poorly, the character still demonstrated compassion. even just a little.

However, holy crap, the first episode blew me away; it was so excellent that waiting for the next one was torture.

I’ll be frank with you. I had some doubts about the anime at first, but they were quickly dispelled. Dude, the animation is gorgeous and seamless, and it fits this show to a T.

I love all the characters, their action, character designs, and their facial expressions. I would recommend it, and there’s sure to be at least one character you’ll fall in love with.

Simply put, a masterpiece. The voices are just right, and the tale and characters are also excellent! Additionally, do not believe any of the males who criticize this anime.

I know that not everyone loves Isekai, but trust me when I say that this one is for everyone who is looking for anime like Wise Man’s Grandchild.

4. Saga Of Tanya The Evil

In conclusion, Youjo Senki is an unexpected historically correct reflection on Germany during the early stages of World War I.

Naturally, it weaves in the magical and supernatural with grace and nuance, but it does so in a way that makes them an essential part of the narrative without being overt or intrusive.

People die from starvation and artillery shells whether they are mages or not, thus these aspects fit in just as well as the trains, planes, and other means of war that exist in our real world.

Anyways, one of the best anime like Wise Man’s Grandchild.

5. By The Grace Of The Gods

You can’t help but smile after seeing By the Grace of the Gods. I certainly got the sense of that after viewing it. Not just the main character, but all the others, were wonderful.

There was a lot of mutual kindness, generosity, and assistance, which is something that both anime and real-world could use more of.

My favorite part of this beloved fantasy adventure anime is when the main character travels to another realm and meets lovely people who tour him around.

I gave this a better rating because it made me feel good and I enjoyed how inventively he employed magic and slimes as a tamer.

It’s just my viewpoint, but I appreciate mechs and anything related to them, so I enjoyed the anime and watching the characters develop.

There were no off-putting smells or sounds, and the animation and sound quality are both quite good.

I would suggest to any fans of mecha or similar things because I also enjoyed the characters.

You simply need to be aware that Knight’s and Magic is an anime adaptation of a light novel as such, don’t expect much tension or gritty content.

Overall, even if you don’t think you’ll enjoy it, I still recommend everyone looking for anime like Wise Man’s Grandchild to watch it since you’ll regret it if you don’t!

I just started watching this anime without having high expectations for it. Hey, it wasn’t some general isekai you watch, though.

Although the plot seems a little dull at first, it picks up nicely and becomes more and more captivating with each new episode.

As someone who read the manga first and is now learning how nicely it was animated, I’m rather amazed at how well it matches the book and moves along at the same pace.

I suggest this anime like Wise Man’s Grandchild because it’s incredibly morally upstanding and interspersed with action.

Very well made and a great RPG tale. It’s disappointing because it has a lot of potentials and demands a story continuation.

This series is enjoyable to watch and is comparable to That time I became a slime and other Isekai series, but it is sadly just a few episodes long.

I hope there will be a second season because it seems like they stopped it in the middle of the plot. But still one of the best anime like Wise Man’s Grandchild.

9. Didn’t I Say to Make My Abilities Average in the Next Life?!

This was an unexpectedly delightful surprise to me as an anime, and one should judge it as such.

If I read the manga later, I might be let down by the anime, but if that’s the case, I’ll get to read a better version of the story, which is a win in my book.

Because this program lacked the “trademark bland op male jackass wandering around amassing a harem of braindead female morons.

I decided to give it a try despite having previously stated that I was sick of these isekai anime. I’m happy I did. One of the best anime like Wise Man’s Grandchild.

10. In Another World With My Smartphone

I bought all four of the English novels that were available because I adore this anime, and after finishing them, I immediately switched to the online book translation of the original.

I was so close to crying after I had finished reading everything that had been translated to that point. I’m not sure why, but this story just feels so satisfying.

Just show me the rest, please because it is one of the best anime like Wise Man’s Grandchild.

I eventually moved on. However, I later discovered that only half of it had been translated.

This anime pleased me. Sure, there were some silly portions, but the actual conversations and interactions were enjoyable to watch.

There is a boatload of truly terrible anime out there. This is far superior to those. Despite the somewhat stereotypical characters, this one was entertaining to see.

The focus of this show is the character development, not the action or the plot. However, I thought they were attempting to cram in too much at once.

Overall, very much worth watching anime like Wise Man’s Grandchild. . Don’t believe the naysayers; watch the first episode and get your own opinion.

There are much more fantasy animes that are far better than this one, but the majority of reviews about this anime are highly unfavorable of the story and suggest that watching this is a waste of time.

This anime is terrible, but not so horrible when compared to many other ones; it’s simply your typical fantasy anime.

There is much other fantasy anime that is much better than this one, so I would never suggest it, but I will say that it isn’t all that horrible.

I find this anime like Wise Man’s Grandchild to be ok overall.

Looks like you have reached the end of our article on the best anime like Wise Man’s Grandchild. If this article has helped you then do let us know by commenting or following us on social media.