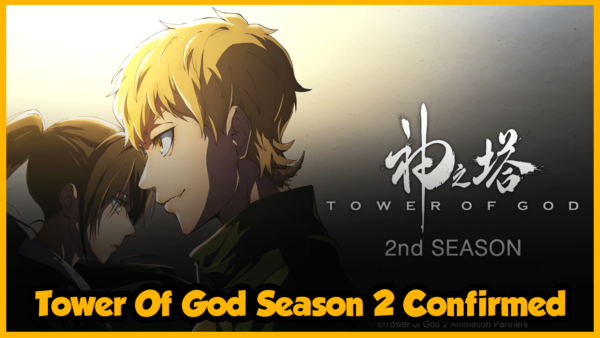 The announcement was certainly a surprise to many fans. Everyone had been eagerly awaiting for Tower of God season 2 announcement as season 1 was already being hit and appraised. Fans were confused because nothing credible has been posted since the release of season 1. So, this was certainly a shock and a surprise in the form of good news for everyone.

Crunchyroll has officially tweeted and informed the fans about the release of Tower of God Season 2.

Updates on Webtoon of Tower of God Season 2

The webtoon anime adaptation of webtoon will be returning with season 2 of Tower of God. However, the official source of the anime adaptation has been on hiatus. The series’ author is currently struggling with health issues. They have decided to end the South Korean story, which began in 2010 and has released several chapters. Unfortunately, no official announcements have been made about the return of webtoon with new chapters.

Crunchyroll’s official press release regarding the official announcement about anime is as below:

Crunchyroll is bringing the long-awaited second season of Tower of God, an anime series based on SIU’s WEBTOON webcomic. The beloved series with the same name was created on WEBTOON, the largest digital comics platform in the world.

It has more than 4.8 billion monthly users and is also the home of the most popular graphic novel edition. The second season of the dark fantasy series will see Bam continue his journey through the mysterious tower. Season 2 will be released on November 22.

It seems like the first season of animation was just released yesterday. But, I will have the chance to catch up with all of you through season 2. Thank you to the entire anime production team and the readers. I can’t WAIT to see what season 2 brings. We are grateful for your continued support! The following official description was provided by Crunchyroll for BAM’s adventures in Tower of God Season 1 Episode 1.

“Twenty-Fifth Bam must travel skyward in a mysterious Tower if he hopes to reunite with Rachel, his best friend. Even if it means facing his death. Rachel warns Bam not to forget about Rachel before he mysteriously disappears into the tower gates. Bam, unwilling to lose her, enters the Tower surrounded by Shinsu, a divine, and magical water.

Season 2 will adapt “Tower of God Part 2 – The Prince of Zahard” (volume 2, chapters 1 to 35). Season 2 will adapt to the anime’s first season, which had approximately 78 chapters. However, we will need to wait to find out what exciting story this new season will tell.

The story was wrapped up in the first season of Tower of God. It was very entertaining. Bam finally found Rachel after he had climbed the tower. Bam and his friends promised Rachel that they would help Rachel in the Administrator’s Exam, but Rachel betrayed him because she was selfish.

Also, her backstory was revealed. It clearly showed how she used Bam as a climbing partner and pushed him out of the barrier to try to kill him. Bam is alive and determined to climb the Tower and find answers about Rachel’s behavior. Bam must face new challenges and villains as he attempts to conquer the tower. Tower of God Season 2 will feature new characters, new locations, and new tests. It will continue the story of Bam’s climb to the top of the tower.

Who are the members of the cast of Tower of God season 2?

If the majority of the cast stays the same, we expect that Tower of Godseason2 will consist of these voice actors:

This season will be filled with new characters, which will mean that even more voice actors are joining the fray. We cannot wait to find out who.

When will Tower of God season 2 be released?

No official release date has been set yet. We wouldn’t be surprised if the second season arrives in early 2023. The Tower of God Season 2 will continue in 2020 from the beginning. This means that we might see what happens after Rachel’s shocking betrayal of Bam.

Takashi Sano was the director of the anime adaptation series Tower of God’s first season. The series’ director is currently working on a short Rick and Morty animation called Rick and Morty vs Genocider. This story was written by Erika and illustrated by Masashikudo. Miho Tanino designed the character design. The anime’s composer is well-known because of its music.

The opening theme music to the first season was by “TOP”, and the closing theme was performed by Stray Kids, a Korean band. The 2 ending and opening themes for the Tower of God seasons are still not decided.

We are unable to confirm that season 2 of the anime has been announced. The official announcement that Tower of God anime season 2 will be produced house was made by Crunchyroll on August 6, 2022. We will update this article as soon as we get an update on this.