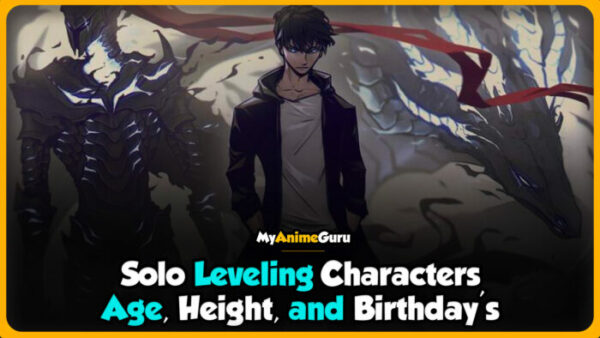 Solo Leveling is one of the most famous manhwas of all time. In case you have missed it or you don’t know what manhwas are,

Manhwa is the Korean term for comics and printed or drawn cartoons. Besides Korea, the term usually refers to South Korean comic books. Manhwa is very much influenced by Japanese comics known as Manga. Modern Manhwa has extended its reach to many other countries.

So, Solo Leveling is considered one of the best in the industry if not the best. This manhwa consists of 14 volumes and 270 chapters and is a completely epic manhwa.

For those of you who want to know more about the particular characters then you are at the right place. MyAnimeGuru brings you an article on Solo Leveling Every Main Character Age, Height, and Birthday.

Let us discuss these in detail.

Sung Jinwoo is around 20-25 years old and around 6 feet tall. He is the primary protagonist of the series. He was the weakest hunter in the manhwa but his life changed when he got the chance of a lifetime.

He gained the ability to grow in power without restraint and as a result, he became the second shadow monarch and the greatest hunter in the history of mankind in the Solo Leveling Manhwa.

Not much here, you have to read the manhwa to know more.

Who Is Sung Jinwoo In Solo Leveling? Know More

Thomas Andre is around 6 ft tall and by his appearance, he looks around 40+ years of age. He is an American hunter who ranks first among the five national-level hunters in the world and is a total badass character.

He is a proud and aggressive man with a steel-hard body and long hair. Enemies can’t keep up with this guy. He is also a good guy but doesn’t really show it. He even respects his opponents and enemies.

Sportsmanship is one of his qualities.

Liu Zhigang is around 6’2 inches tall and by his appearance, he is around 25-30 years old. He is the best hunter in China and is second among the top 5 national-level hunters in the world.

He is a muscular and handsome young man who usually keeps his composure in check but when provoked, his eyes glow really dark yellow.

He is quite confident in his words and actions. Lui is a battle-hungry guy who loves to fight. More in the manhwa.

Christopher Reed is around 6 ft tall guy and he looks at least 25-30 years old. He is the strongest hunter in America after Thomas Andre and is 3rd among the top 5 National Level Hunters in the world.

He is a handsome young man with a goatee and naturally wavy hair. When he is using his powers, his eyes start glowing blue.

He can be considered a lone wolf and lived alone. He is not the kind of guy who would accept defeat with a fight and is very brave and daring.

Sung-II Hwan is around 5’10 inches tall and he was around 35-40 years old in the manhwa. He was an extremely powerful S-Rank hunter in Korea and the father of Jinwoo.

He was a really good guy who cared deeply for his family. If you want to miss him then stand in between his missions or try to harm his family and you are done for.

He was a merciful hunter and always helped the weak.

Go Gunhee is 80+ years old and he is around 6ft tall. He is a professional S-Rank hunter and the chairman of the Korean Hunter’s Association.

Gunhee is a good guy who loved people with morals and hated those who wanted power for personal gains. He is old but he should not be mistaken for weak.

He used to be the strongest hunter in Korea.

Goto Ryuji is around 40-50 years old and around 6ft tall. He was the strongest hunter in Japan and the Guild master of the Draw Sword Guild.

Goto Ryuji was kind of a fake man who liked to show himself as a calm and good person but from inside he has little to no regard for human life. He was selfish and only cared about himself.

Lennart Niermann is 24-30 years old and is around 6 ft tall. He is the strongest hunter in Germany and ranked 12th in the world.

He is a very polite human being who is not drenched in arrogance or power. Despite being the strongest, he shows no signs of arrogant behavior.

Hwang Dongsoo is 28-34 years old and is around 6 ft tall. He is a Korean-American S-rank hunter.

He was a selfish and arrogant person who likes to show off his power. He considered everyone as lower than him.

He enjoys bullying others and likes to satisfy his ego by picking on the weak.

He was also an arrogant personality and considered everyone weaker than him. He also has no respect even for his friends and allies.

10 Best Anime To Watch If You Like Solo Leveling (Ranked)

That was all for our article on Solo Leveling every main character’s age, height, and birthday. I posted everything I found on this topic and for what I didn’t I will update it.

Let me know in the comments what you think and you can follow us on social media too.