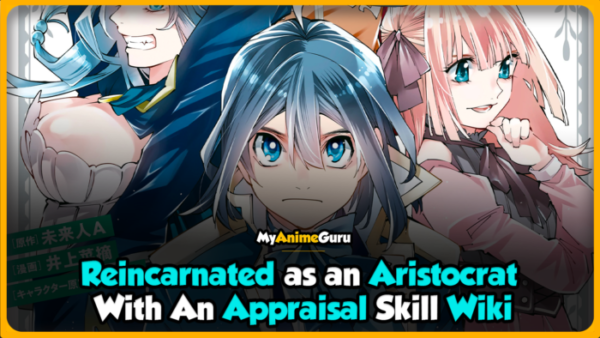 Reincarnated as an Aristocrat with an Appraisal Skill is one of the best isekai manga of all time and one of my fav too.

MyAnimeGuru brings you an article on the Reincarnated as an Aristocrat with an Appraisal Skill Wiki. This article will contain all the info you need to know about the manga.

So, without any delay let’s get started.

Introduction Of Reincarnated as an Aristocrat with an Appraisal Skill

As a Reincarnated Aristocrat, I’ll Use My Appraisal Skill to Rise in the World is a Japanese light novel series written by Miraijin A.

There are three volumes available as of September 2021. In June 2020, a Natsumi Inoue-illustrated manga adaptation started running in serial form on the Magazine Pocket website.

The manga’s chapters have been compiled into eight volumes as of August 2022.

Let’s talk about the release history of this manga and novel in this Reincarnated as an Aristocrat with an Appraisal Skill wiki.

The light novel by Miraijin A debuted on the website Shsetsuka ni Nar for novel posting on October 31, 2019.

Later, Kodansha bought the series, and starting on July 2, 2020, they will start publishing it under their Kodansha Ranobe Books imprint with artwork by Jimmy.

There have been three volumes published as of September 2021. Kodansha USA announced in March 2022 that it had obtained a license to publish the light novel series in English as well.

The series’ various chapters have been compiled into eight tankobon volumes as of August 2022.

The manga was licensed for English publication by Kodansha USA in November 2021, with the first volume arriving in September 2022.

Synopsis Of Reincarnated as an Aristocrat with an Appraisal Skill Wiki

A typical salaryman passes away and is born again as Ars Louvent the son of an eminent.

While he’s not gifted in swordplay or magic but he does possess an ability that nobody else has: “Appraisal.”

By using this ability Ars can determine the strengths of an individual and potential, as well as the amount of potential they possess and where the rest of their strength.

This ability is particularly useful in the current situation in the nation.

The corruption of the government is rampant, revolts happen more frequently than not nobles all over the world are bolstering their fortifications, in preparation for a complete conflict.

In this light, Ars realizes he too is required to prepare by gathering skilled individuals.

From a persecuted foreigner unmatched in the battle A slave with a mysterious talent for magic to a shy young man with an insatiable thirst for knowledge.

Ars starts to gather people to help him, hoping to establish the most powerful land.

The Ars Lovent reincarnated in a different universe as an unfit aristocrat. Like in the modern world physical strength, as well as intelligence, were not as impressive in an alternate world.

However, Ars had a capability known as “appraisal ability” which lets him know the potential of each person. To safeguard his subjects, Ars transforms a weak area into the most powerful by using “appraisal abilities“.

Read Also – I Have A Mansion In The Post Apocalypse Wiki

He was an heir to the wishes of his father Raven, who died in the year he passed away.

Father Raven became an heir to the Lovent family to protect the Lamberk territory as well as the population.

The next task for the characters from “Appraisal Skills” is the contest for the next Governor-General from Misian without waiting to see the beginning of conflict!

Ars along with his twin brother Clan attempt to swear their loyalty to their abrasive brothers, Basamark, in Perena County However, one of them will alter the destiny that Ars and his group.

Review Of Reincarnated as an Aristocrat with an Appraisal Skill

Overall it’s not a terrible story. It’s more than average, however, some imperfections keep it from being an absolute masterpiece.

The story is a beautifully written portrayal of the struggles of a young lord with leadership and wartime strategy.

While it has its strengths, like an extensive roster, real and approachable MC, and a well-crafted world setting, there are several flaws to address.

You are reading Reincarnated as an Aristocrat with an Appraisal Skill wiki.

Another plot problem involves the “racism” thing that is happening with the Markas. Though it’s well handled, however, I believe there’s not enough impact on the whole thing.

It’s always the situation when there’s an introduction of a new group, they’ll throw up a brief angry scream about it being Marka Marka but then wait for the leader to say “no it’s okay.”

I think they handled the race issue during the actual fife quite well, however. The entire implication of taking Marka from the position of Marka represents the real-world views that are tied to racism.

The comments made by employees can be interpreted as “he isn’t the same as the rest of the markas” which is a wonderful point to include.

The artwork is good however, it is a bit boring. There aren’t any major issues and it appears to be better than average.

Stay on Reincarnated as an Aristocrat with an Appraisal Skill wiki.

It uses well-executed actions and features fantastic urban landscapes. The only thing I can think of improving is making things more dramatic or absurd.

As in creating faces that are somewhat more dramatic when something is awful, but I’m certain this would be a good fit for the plot.

Characters are by far the weakest aspect of the plot. They are often smug and the most intriguing person is one who has no loyalty or even interest in the protagonist.

The characters are somewhat bland, but there are moments of interest and well-planned development.

I’d like the characters to have more presence on stage and the author attempts to accomplish this with certain characters by having them perform crucial roles throughout the story.

Overall, they’re good however they are a little forgettable. The Manga is rated 7.5 rating from me.

Read Also – I’m An Evil God Wiki | Everything We Know

That was all for our article on Reincarnated as an Aristocrat with an Appraisal Skill Wiki. I hope you found it useful and that this article has helped you in gaining something.

Reincarnated as an Aristocrat with an Appraisal Skill wiki contains information from reliable sources.

Let me know your views in the comments and you can also follow us on social media.

Read Also – To You Who Swallowed A Star Wiki