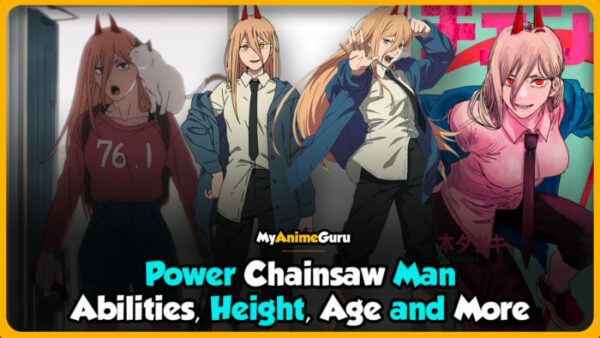 Chainsaw Man is one of the most underrated anime and manga series of all time and when it comes to the characters, it offers the best it can.

Today on MyAnimeGuru, we are going to write on Power Chainsaw Man Wiki. We will include her abilities, physical appearance, and back history.

You can read more about chainsaw man characters in the separate article I wrote. Let’s start this one on Power Chainsaw Man.

She is also a member of Public Safety Devil Hunter and Makima’s Special Squad.

Power is also a devil and therefore she has two appearances.

Power has possessed the corpse of a mysterious woman or girl who has long hair. The color of her hair varies between pink and blonde in manga drawings and appears as strawberry blonde during the animation.

As a Fiend, she has eyes that are yellow and red, which create a cross-shaped pattern sharp teeth that have defined fangs, and light red horns that protrude from the head.

If Power can accumulate too much blood the horns will grow bigger and more curving and she may grow more horns on the sides of her head.

When she is in Her Blood Devil form, she appears as a humanoid, with four arms and the body is mostly pale. Her head has a pointed shape with red-colored sharp teeth, and two eyes that have cross-shaped pupils.

Her horns are also long which resembles the way her fiendish form appeared with bloody eyes, and longer hair when she is in this form.

Her chest is wide with an open rib cage, showing an open chest cavity that is filled with stomach organs that extend the neck.

Her arms of her are red from the elbow to the hand. They have four fingers and massive claws. Her legs are the same red coloring starting at the mid-thigh and culminating in heels-like feet, and she has a cat-like tail.

Personality Of Power In Chainsaw Man

Power is greedy, childish, and almost completely self-motivated. She is mainly overconfident and that can be seen in her fights too.

She doesn’t have any loyalty to demons or humans but is open about the fact that she’ll be on whatever side is winning. Power loves the thrill of fighting and relishes showing her strength and showing her superiority.

When she was amid a horde of zombies she was ecstatic and instructed Denji to keep an eye on how she defeated them all on her own.

She is a narcissist and very egoistic and often asserts that she can do things she can’t do, only to drop them midway through when the situation becomes to be a disaster for her.

Power is a habitual, compulsive lying liar. After getting into the crosshairs of Makima after killing the devil even though she wasn’t supposed to. Power instantly took the blame for Denji and claimed that he had told her to take it out.

She also blamed Denji for eating all the food the team gathered, even though she had smearing food particles on her face, and, when she was accused of abandoning the fight due to fear, Power falsely stated that she fled due to being hungry.

Power is also not hygienic at all, and rude She also feels that the people around her have to take care of her. Power admits that she rarely flushes her toilet or bathes and thinks that humans are too sensitive to care about their hygiene so much.

Power is known for creating a variety of ways to make people bow and suffer.

In the case of being trapped in a hotel as a result of the power to summon the Eternity Devil she was in the hotel “planning” to be awarded the Nobel Prize and become Japan’s Prime Minister to raise their taxes to 100 percent.

She is not afraid of gossiping about her friends behind closed doors and sharing the secrets of Aki’s shorter time in conversation with Angel Devil.

Power is adamant about the difference between beef, pork, or human flesh; she is willing to eat any of them even if the meat has a disgusting taste of zombie flesh. She is averse to vegetables and will throw them out when she sees they are in her meal.

While she’s very selfish, Power was able to feel compassion in the very first instance toward her pet after being concerned about the taste and smell of blood, and the sensation of dying when killing someone or something.

This empathy prompted her to do something for other creatures after the pet Meowy was taken away. Power also begins to care for her family.

Power also starts to take care of only a few of her closest family members, including Denji, as evidenced by buying Denji a birthday cake and later, putting herself in danger to safeguard Denji.

She also seems to be concerned about Aki and is upset and fearful when he turns into his Gun Fiend. In contrast to her values, power became extremely compassionate about her friends and we can see later in the manga how she sacrificed herself to save Denji.

We’ll just discuss what the anime has shown thus far, so as to not reveal any major spoilers. Power, even though she acts extravagantly, does have an underlying heart.

This is evident in the very first episode of the TV show. Most importantly, she is a lover of her pet cat Meowy. There isn’t much backstory told in the anime about power but we will try to compile a few things as shown.

Meowy is a cat Power found in the woods. In spite of her desire to blood – as well as her initial plans to devour Meowy – Power began to become attached to Meowy and the two became close friends.

This was until the Bat Devil held Meowy hostage in a statement that said he’d let the cat go until Power offered him some human blood.

This resulted in Power initially scheming to betray Denji Power, and she fed Power into Power, who was then turned into the Bat Devil.

The devil, however, planned to eat Meowy and Power nonetheless until Denji in the form of a Chainsaw Man form, saved everyone else, which led to the relationship between him and Power becoming more friendly with Power.

They now along with Meowy and Power, are living together as living roommates in Aki’s apartment.

In her initial form as a devil, Power was said to be terrorized to the point that other devils would run away from her scent, but it could be just exaggerating.

Being an actual Devil Power is able to use all typical capabilities of a devil like the capacity to negotiate with human beings for a fee, and restore her health by eating blood, or taking over the body of a dead person as well as their consciousness, turning into a fend, and then returning within Hell when she is killed.

At the moment, Power has only one contract with Denji. In exchange for the promise to locate and meet the Reincarnated Blood Devil, Power gave Denji her blood.

Denji made use of her blood to make the chainsaw of blood and disrupt Makima’s regeneration.

The strength power has is greater than that of a normal human. She can use a powerful hammer that is made from her blood to kill a bear without effort and smash an entire Sea Cucumber Devil’s body in a single swing.

Power is a quick fighter who can land another punch on Denji when she was betrayed by her opponent while deflecting his swing.

She was able of disappearing away from the Katana Man’s view as he shot down the devil hunters, before landing an uppercut that Denji was unable to block. Then, she landed a punch that he couldn’t block.

She’s in a position to stop bleeding, even though she admits that it’s not easy. Power also alters the abilities of her targets by mixing her blood.

Power can create an enormous hammer from her own blood that she can use to crush her opponents.[26She is also able to create smaller handheld versions.

The power of the body can make spears out of her blood, and use it to attack the opponent. By putting her blood in bottles and putting them in the vicinity as traps, she could create spears that appear out of the surroundings to catch the opponent off guard.

In her Full Devil form, Power can generate thousands of blood swords and spears from the blood surrounding herself, levitate and throw them to her enemies.

Through an agreement, Power can transfer her life force and blood to another person, similar to Pochita’s capacity to absorb the body of Denji. This was enough to repair the severely damaged body of Chainsaw Man.

In the form of an eloquent, Power can replenish her health through the consumption of blood. Additionally, as a Blood Devil, her regenerative abilities are higher than other devils.

In this condition, one blow from Power can send Denji toward the ceiling. She can replenish herself using tiny quantities of blood after her death, by eating that of the more powerful devil.

After defeating Chainsaw Man at the hands of Makima, Pochita made use of this power by permitting the blood inside her body to absorb itself.

After drinking blood from the Chainsaw Man, Power is revived as a devil based on the tiny amount of blood Denji has consumed. Her speed, strength, endurance, and blood manipulation capabilities are significantly enhanced. Since her transformation, she’s capable of restraining Makima’s dominant abilities.

That was all for our article on Power Chainsaw Man. I have a complete series of Chainsaw Man characters and articles for you to read. Check them out.