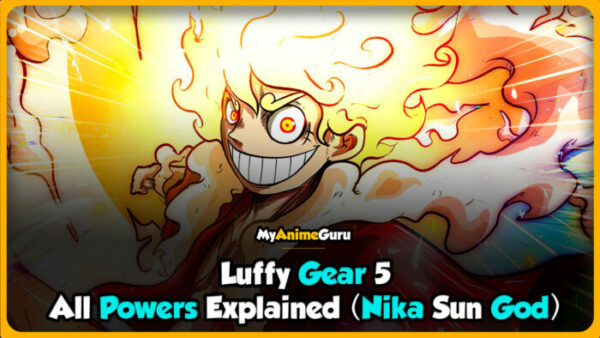 So, the recent One Piece Film Red and also the latest chapter of One Piece Manga shows the Luffy Gear 5 transformation which shocked the viewers to their heights.

This transformation was said to be so powerful that Kaido’s comparison of Luffy with Gol. D. Roger, Shanks, and Whitebeard seems legit.

Luffy’s Gear 5 is extremely powerful and advanced. Where it’s obvious that by using this form, Luffy will defeat Kaidou and will bring close the ending of the Wano Arc.

Today, let us discuss further and understand what Monkey D. Luffy is capable of when he is in his Gear 5/Nika Sun God transformation.

We will also uncover a secret about the devil fruit that Luffy ate which will blow your mind. Let’s start with the origin of Gear 5.

We got to see the gear 5 transformations for the first time during the battle of Onigashima. When Kaidou and Luffy were fighting and Luffy was already at his limit, a member of CP-0 came to distract Luffy and that led to a powerful strike of Thunder Bagua from Kaidou.

This strike was so powerful that Luffy was defeated and rendered unconscious on the spot.

As Kaido took a long breath and felt relieved, we can guess what happened next. Suddenly when Luffy was unconscious, he started releasing a tremendous amount of Advanced Conqueror’s Haki and his heart starts beating at a certain rhythm.

This rhythm was called The Drums Of Liberation as described by Zunesha (Zou Island). This leads to the awakening of Luffy’s Devil Fruit Powers transforming him into a never appeared before action figure.

As Kaido was shocked, Luffy couldn’t understand what was happening to him. He couldn’t believe how is he even standing at that point.

His Conqueror’s haki at this point was so strong that his crewmates who were thinking he is dead, instantly recognizes him and felt overjoyed. Captain Eustass Kid and Trafalgar Water D. Law understand instantly that Monkey D. Luffy is not someone they can mess with.

Who Is Imu In One Piece? Is he the strongest?

When he transformed into Gear 5th, his hairs and clothes were all white. In Manga, Momonusuke explains that Luffy in gear 5 looks like a God.

His hairs and clothes are all white, and clouds were hovering around his neck and shoulders.

A fan put his theory as an explanation saying he was all white because he is made of rubber and awakening reveals its true form.

Rubber is made from latex derived from white rubber trees. And this explains the white look of Monkey D. Luffy.

His pupils were yellowish and orange like a Sun in his eyes. Luffy’s Gear 5 transformation was cartoonish and have an unbelievable amount of power making him close to invincible.

But that’s not the only thing that makes this transformation amazing. The powers he gained in the Gear 5th transformation were enough to rival that of 4 emperors of the sea if not greater than them.

Read Also – Where to watch One Piece Ad-Free?

This was by far the biggest mystery uncovered till now. The Gum-Gum fruit captured by Shanks in the starting episodes of the manga and anime was none other than the Mythical Zoan Type Devil Fruit, not a Paramythia.

The original name of this fruit is Human-Human Fruit, Model: Nika. And after the awakening of this fruit’s real power, it is called Nika Sun God Transformation.

Monkey D. Luffy has already awakened the devil fruit in the battle during the Onigashima against Kaido. And that might explain the color of pupils during this transformation.

The reason why this devil fruit’s name was changed is not made public but we can guess so far who would be behind it. According to Zunesha and some poneglyfs, the previous owner of this devil fruit was called JoyBoy.

While we don’t know much about it in the manga and that’s probably because of the 100-year void in the one-piece history discussed in the manga when the World Government was formed.

A 100-year void may hide the actual reason why this devil fruit was told as a Paramythia but not as a Mythical Zoan Type.

Since this devil fruit is so special, let’s talk about the powers that Luffy gain when he awakened the power of the devil fruit.

Fifth Gear Model, Nika Sun God: Gear 5 was created during the battle on Onigishima. As a result of Luffy awakening his devil fruit abilities. In this state, Luffy’s heartbeat takes on a musical rhythm that Zunesha has described as the drums of liberation.

This form is supposed to be a hell lot stronger than the other 3 forms of Luffy Gear second, third, and fourth. We are now going to discuss the powers of the Nika Sun God transformation as well as the risks it brings to the user.

Luffy transformed into Nika sun god while the fight in Onigashima. The amount of Haki released from this form was enough that it could be felt on the five-floor of the skull dome.

Kaido had never seen such an enormous amount of Advanced Conqueror’s Haki in his lifetime. He realized instantly that Luffy was never an ordinary man and he is risking his existence.

Luffy also learned Ryou, which is called the Haki of the Wano Kingdom. He was using this to manhandle Kaido before he transformed into Nika Sun God.

So, it’s obvious that after the transformation of Awakening of Mythical Zoan Type, what would be the level of his Ryou and Haki? Let’s talk about the next power Luffy gained after awakening. Monkey D Luffy Gear 5 possesses an enormous amount of Haki.

See Also – One Piece Action Figures and Merchandise (10% Off)

You might be thinking that Luffy already had the body of a rubber. But, that’s not entirely true. His body was not made of rubber but only possess some properties of rubber and that is what changed in the Gear 5 Nika Sun God transformation of Luffy.

Aligning with the mythical zoan nature of this new form Luffy’s already rubbery body gains strength freedom and durability that surpasses what he would receive from his previous forms. It is strong to the point that it’s now even cartoonishly malleable.

There are a few examples of this one of them is when Luffy took a hit to the head from kaido’s hasaikai and instead of being injured his head wrapped around the weapon. Another example is when kaido smashed him into the ground and his body squished and later returned to its normal shape.

He could increase his arm to an enormous size to grab kaido’s transformed body and could easily manhandle kaido.

Despite his enormous size, Luffy was swinging him from side to side. Luffy can also perform the inflation over his entire body at once transforming himself into a giant of massive size.

4. The Power Of Imagination (Most Fearful)

What makes it so special about the Gear 5 that everyone is talking about it? Well, the case seems to be the power of Imagination. The Luffy Gear 5 Sun God Nika allows him to use his body as he wants.

He can crawl like a snake. The fighting style involved in using gear 5 is making everyone laugh with his moves.

He can do with his body whatever he wants and that’s why the power of Imagination is something that can not be ignored.

Read Also – Netflix Is Giving One Piece A Live Action

If you remember the Dressrosa Arc, where Luffy defeated Doflamingo. He used awakening to manhandle Luffy and turn his surroundings into strings. So, likewise, Luffy can also extend his rubbery nature to the environment around him.

In the manga, we see this power when he stretched a section of the roof and used it to send Kaido’s attack back at him.

This power also seems to be able to affect organic material as well as shown when kaido literally swallowed Luffy’s hole and then proceeded to have his body expand and inflate along with Luffy’s.

He’s even demonstrated that he’s able to apply this effect on an intangible matter such as lightning which seems almost impossible for anyone else to do.

Despite the strength of this form due to inexperience, it consumes plenty of energy to maintain and use. This leads to Luffy visibly aging once he transformed and also experiencing a high amount of fatigue.

Now Luffy can turn anytime back by forcing his heart to beat at the rhythm of Drums Of Liberation. Luffy Gear 5 action figure could destroy the internet now.

Now that we know what powers Luffy gained from Gear 5th, we will talk about the techniques Luffy uses in Gear 5. These techniques are the main elements that make this transformation OP.

Gomu Gomu no Fusen is a variant of Luffy’s previous techniques he uses in Gear 4 and also to land from air to land. Luffy used this technique when he entered the body of Kaido. He used it to inflate him like a helium balloon which was far beyond what Luffy can use before the Gear 5 transformation.

Gomu Gomu no Gigant is a technique where Luffy uses Gear 3-like inflation over his whole body rather than a body part. This technique makes his body fully float and bloated looking like a giant.

This is an overpowered technique of Monkey D. Luffy and you can guess this by the fact that this was the finishing move against Kaido. In this technique, Luffy inflates his fists to the size of Onigashima and envelops them with Advanced Conqueror’s Haki and Ryou with Hardening.

God Bless those who face this fist.

This is a direct power of Devil Fruit Awakening that resulted in Gear 5th transformation. Luffy can transfer the properties of rubber to its surroundings.

And that is exactly how he used this technique to grab a lightning bolt and used it against Kaidou. This is an overpowered and underestimated technique used by Monkey D. Luffy in his Gear 5th transformation.

In Which Episode Will Luffy Use Gear 5?

Luffy will use Gear 5 anywhere between Episode 1063 to 1068. How did we get this number? Well here is the explanation.

So, this is the most searched query right now, and why not? Everybody wants to know this. The anime is at Episode 1033 which follows the story of Manga Chapter 1013.

In Manga, Luffy uses gear 5 in chapter 1044 which is 31 Chapters ahead of the anime right now. So, if we add 31 episodes to current anime episodes we will get 1064.

That was all for our article on Gear 5 Luffy. I guess you have got an idea of an amazing thing that ODA is going to release.

Let me know in the comments what you think and you can also follow us on social media too.

Yes, the Gear 5 Luffy is confirmed. He has made an appearance in the recent chapter of the manga and the latest one-piece red movie.

In which episode does Luffy use Gear 5?

What is Luffy’s highest gear?

Gear 5th is by far the highest and strongest gear of Monkey D. Luffy.

Is Luffy’s Devil Fruit a Zoan?

Does Luffy have a God Fruit?

The One Piece fanbase collectively lost their minds when it was revealed that Luffy’s devil fruit, the Rubber-Rubber Fruit, was a mythical Zoan all along. The Human-Human Fruit Model, Nika, had its name changed by the world government to hide its true nature.

When does Luffy use gear 2?

Luffy used Gear 2 for the first time in episode 272 of the One Piece anime with the title, “Luffy is in Sight! Gather at the Courthouse Plaza” in his battle against Blueno, a CP9 at the time.

How tall is Luffy?

Luffy is 5’8 inches tall after the time skip. Before time skip he was 5’7 inches.

How old is Luffy?