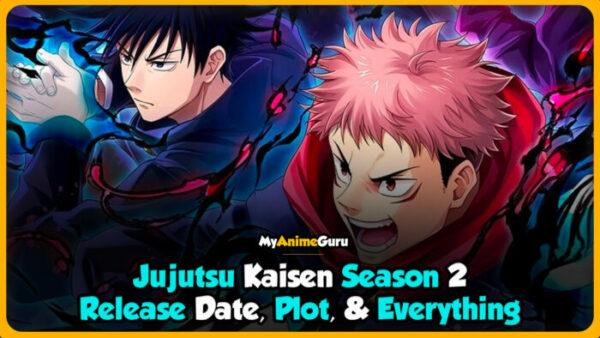 2023 is gonna be an awesome year for anime fans like me. You might be wondering why, it’s because the three of the most loved anime series are getting a new season this year.

Demon Slayer Season 2, One Punch Man Season 3, and Jujutsu Kaisen Season 2 release dates are set for 2023. Now that you know why we should be celebrating.

Jujutsu Kaisen is one of the best modern shonen anime of all time. The storyline, plot, character development, power levels, everything is just perfect for a really good anime.

After the first season gets a record-breaking performance, MAPPA is set to launch a new season animating further arcs of the original manga.

Keep reading to get every information available about the Jujutsu Kaisen Season 2 Release Date.

The Jujutsu Kaisen anime series, known as JJK or 呪術廻戦 in Japan, is based on a successful manga.

The Jujutsu Kaisen manga series is written and illustrated by Gege Akutami.

How many volumes of Jujutsu Kaisen are there?

Let’s see the information for anime that has been animated.

Jujutsu Kaisen season 2 will air at the end of July 2023. The premiere date was announced at the Jujutsu Kaisen event at Jump Fest 2023 on December 17.

Along with a brand-new trailer that showcases an updated look at some of the characters from season 1 Satoru Gojo, and Suguru Geto, while also introducing characters who are new to the show like Ruji Amanai, and Toji Fushiguro.

As stated previously the season is scheduled to air simultaneously throughout two “courses” (Japanese broadcast seasons with a duration of three months per) This is to say the Jujutsu Kaisen season 2 will air in July, and end within or shortly after the closing of December.

The major characters from season 1 will remain unchanged but again here is a list of probable characters that could be seen in Jujutsu Kaisen Season 2.

What about Yuta Okkotsu as the main character who plays in Jujutsu Kaisen 0? It’s clear from the manga Yuta Okkotsu will be a part of the main series very soon and a post-credit scene in the prequel film is pretty sure.

Jujutsu Kaisen’s first season came to an end with the end of the Death Painting Arc, which took place from chapters 55-64 of the manga.

It is now established that season two will modify Gojo’s Past Arc, which covers chapters 65-79 from the manga.

It revolves around – yes, You guessed it, Gojo’s history, and specifically the mission of Gojo and Geto taking a Star Plasma Vessel to Tengen.

Jujutsu Kaisen season 2 will also adapt to the Shibuya Incident (chapters 79-136). This isn’t spoiler territory here, so don’t be concerned.

It’s been confirmed that it will last two whole seasons so the coming season could last between 24 and 26 episodes.

Are you looking to refresh yourself on what’s been happening? After defeating Kechizu and Eso, Cursed Wombs Eso as well as Kechizu, Yuji, and Nobara rejoin Megumi.

However, Sukuna, who is using Yuji’s mouth due to anime devours the finger, takes towards getting back his power.

The new season is expected to be a battle against that creeping evil, and The third Cursed Womb triplet, Choso, and his fellow villains of the series Geto as well as Mahito.

There’s also the matter of a mole within Jujutsu High, with teacher Utahime looking for the duplicitous wizard. This will also comprise an important part of the next season.

In the season’s final set-up, Yuji, Megumi, and Nobara (as Maki and Panda) are suggested to be promoted to the Grade-1 Sorcerer And Gojo asks the group to join an exciting brand new task.

Who Will Be Producing Jujutsu Kaisen Season 2?

He is also working on an original project in the works called “Project Bullet/Bullet” produced by E&H Production and slated to be aired through Disney Plus in Japan.

The first Jujutsu Kaisen season 2 trailer is out in conjunction with the Jump Festa celebration. The trailer features brief glimpses of some of the main characters from season two and characters, the Japanese teaser gives a glimmering glimpse of what’s coming but without actual footage. Check it out above.

Jujutsu Kaisen’s Twitter account has also announced the first image of season 2’s important art. The image, which features Gojo as well as Geto in their student roles, can be viewed below. Look out for a trailer shortly.

Where Can We Watch Jujutsu Kaisen Season 2?

It’s currently unclear what streaming provider will be able to secure the North American licensing rights to Jujutsu Kaisen season 2.

However, considering the series has been simulcast by Crunchyroll previously and also the merger between Crunchyroll and Funimation in the past year, it’s highly likely to be the case that season 2 of Jujutsu Kaisen will be available on Crunchyroll or, at the very least, make an appearance on the platform at some point shortly.

That was all the information related to Jujutsu Kaisen Season 2 Release Date. I hope you got what you were looking for and let me know in the comments if I have added something that is not accurate.

You can also follow us on social media to never miss an update about the new articles that are published here.

What is the release date of Jujutsu Kaisen Season 2?

Jujutsu Kaisen Season 2 Release date is set for July 2023 on TV as well as major anime streaming platforms such as Crunchyroll.