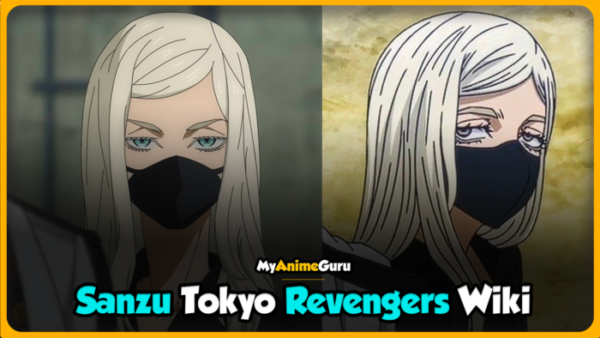 Tokyo Revengers is one of my favorite manga and anime series. One of the main reasons for this is the characters in the manga.

Well, MyAnimeGuru brings you an article on Haruchiyo Sanzu Tokyo Revengers Wiki. This article will contain all the information you need to know about Haruchiyo Sanzu.

So, without wasting any more time let’s get started.

The Vice-Leader of the Kanto Manji Gang is Haruchiyo Akashi, also known as Haruchiyo Sanzu, who later joined Yasuhiro Muto in Tenjiku.

Also served as the Fifth Division Vice-Captain of the Tokyo Manji Gang two years before the founding of Kanto Manji. He is Bonten’s Number 2 in a different timeline of the present.

Haruchiyo is average in height with long, rosy hair that is pink as seen in manga (bleach blonde for the animated version) and eyes that are downturned with large eyelashes.

He has piercings in the right ear and permanent scars around the lips’ corners. Haruchiyo is also known for sharing the same appearance as the younger sibling, Senju Kawaragi.

He usually wears his Kanto Manji Gang uniform. While he was a member of his gang, the Tokyo Manji Gang, Haruchiyo wore its standard uniform and wore a black mask to hide his wounds.

When he was younger and had a shorter hairstyle, he kept his hair pulled to one side, and then re-gelled in the middle. He never wore a mask until meeting Yasuhiro Muto.

At the age of 18, Haruchiyo’s red hair is styled into an elongated mullet that extends to his shoulder. He also has a Bonten tattoo that is on his right forearm, and four piercings in each ear. He is often dressed in formal clothes.

Haruchiyo’s eye color fluctuates frequently. The eyes of Haruchiyo are gray in the anime but are shown as having blue, and green, eyes that are yellow and blue in the manga.

In an alternative period, Haruchiyo had a scar on his left eye rather than the mouth.

When he was a teenager, Haruchiyo has a calm manner of speaking and does not talk much. Haruchiyo was extremely trustworthy and gentler with those who he admired and follows.

In his early days before having the pleasure of meeting Yasuhiro Muto, he had been described as a wild horse that could not keep himself out of trouble.

This made it very difficult for the different divisions within the gang to handle him.

At the age of adulthood, Haruchiyo seems to be more outgoing and blunt. He is also loud. Haruchiyo is brutal and exhibits psychopathic tendencies.

Haruchiyo’s most well-known flaw is his fervent idolatry for Manjiro Sano and believes that Mikey is Manjiro Sano’s “king” and therefore worthy of the highest respect, loyalty, and loyalty.

He is so prone to protecting Mikey or his image Mikey that he allegedly attacked a gang on his own while they were blaming Toman. He also confronted Mucho after being released from detention.

He intended to kill him for treason and even threatened to mutilate Mucho to the bone and then leave his remains to be left behind to be discovered later.

Presently, the king is in a state of sadistic delight and a soaring euphoria at the thought of executing traitors, and then vocally affirming that he is following Mikey’s wishes.

In the event of encountering Takemichi Haruchiyo instructed him to remain quiet until the “king” will speak and threatened to kill Takemichi over his casual behavior in the belief that it was disrespectful.

Before the time-traveling of Shinichiro, Mikey was tragically confined to a vegetative condition after falling from the second floor when playing with an airplane model made of plastic, Haruchiyo did not fall into a state of madness for the next four years.

Even though he’s the katana–wielding maniac in all timelines, he is not to extend the original timeline, due to the sadness over Mikey’s prior worst state.

Skills and Abilities Of Sanzu

The roles which are held by Haruchiyo have changed based on his past and future. He is Bonten’s second in command and was the previous Toman 5th Division Vice-Captain and the Vice–Leader for Kanto Manji Gang. Kanto Manji Gang meaning he holds the highest position within the gang, aside from Mikey.

Haruchiyo could appear to be a quiet and reliable person, but he is highly manipulative. He was capable of manipulating Mucho for an extended period and ended his life after he had been a traitor to Mikey.

Haruchiyo has proven to be a formidable combatant. He’s always fighting with an arsenal of weapons.

Haruchiyo has been proven strong enough to take on the Ran as well as Rindo Haitani who is an extremely strong combination.

Haruchiyo was also able to take down his twin sister Senju Kawaragi who was once thought to be one of his Three Deities, although he admitted that it was partly because he brought her up.

With a katana, the tiger was fighting Tenjiku’s most powerful Kakucho and he ended up and he was the one who had the upper hand in the fight.

That was all for our article on Sanzu Tokyo Revenger Wiki. If you liked the article then do let us know by commenting below.

What is the age of Sanzu Tokyo Revenger?

What is the height of Sanzu Tokyo Revenger?

When is the birthday of Sanzu Tokyo Revenger?

The birthday of Sanzu Tokyo Revenger is on July 3rd, 1990.