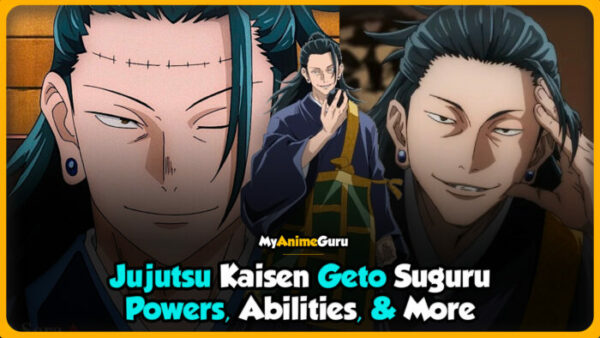 If you aren’t living under a rock then you probably have heard of Jujutsu Kaisen anime or manga. If not then you need to because you are leaving so much of life on the table.

Today MyAnimeGuru brings you an analysis of Jujutsu Kaisen’s Geto Suguru and we will discuss everything that is available about this character in detail.

We got to see in the Jujutsu Kaisen Movie 0 that Gojo Satoru killed him or as shown like that. But after watching this scene, fans went crazy because he was alive in the sequel of the movie which was released a year before the movie.

Let’s uncover this story and get to know Suguru Geto a bit better than we know.

Geto Suguru is the primary antagonist of the Jujutsu Kaisen manga and anime. He is a special-grade curse user who was once a student of Jujutsu High and he was a Special Grade Sorcerer alongside Gojo Satoru but now he is just fulfilling his vendetta against the sorcerers as the cursed user.

He grew a deep hatred against those who were non-sorcerers and which led him to kill 100s of civilians in a single night. He was then expelled from the Jujutsu High School and entitled as the worst curse user of all time.

Suguru is tall and slim, with his long black hair tied back behind his head. The rest falls down his back. His eyes are small and black with bangs that sometimes cover his left eye.

His ears are big enough to accommodate large, circular earrings. As a student, Suguru’s hair was shorter in 2006. His bangs were still prominent, though most of his hair was tied up.

Suguru wore a normal high jujutsu uniform as a student. Suguru, a Buddhist priest masquerading as a student, wears the proper attire.

Suguru wears a gold-colored, kasaya over his black yukata. He completes his monk outfit with white tabi socks, zori sandals, and a kasaya garment.

Non-sorcerers were a hateful thing to Suguru Geto, who referred to them as “monkeys”. He believed sorcerers were the superior race and humanity’s next step in evolution.

He was arrogant and condescending to normal people, using fake personalities to attract cursed people. Suguru found that non-sorcerers were so disgusting, he had to spray himself to get rid of the “monkey smell”.

Suguru believed that monkeys had only two roles with him: money-collecting and curse-collecting. Suguru would allow curses to be used against them if they didn’t fulfill their roles.

Suguru, on the other hand, cared deeply about his curse users and referred to his commanders as family.

Suguru was admired by all of them for his efforts to make sorcerers a first race and they hoped that he would be crowned king of jujutsu. Suguru was polite to jujutsu wizards, even though he did so under one of his fake identities.

He claimed to be friends with Yuta Okkotsu and insulted his friend shortly after expressing a friendly disposition.

Geto murdered one hundred and twelve village residents, becoming a curse user. He also left behind his Jujutsu High pin. Suguru decided to be true to himself and decided that he didn’t like monkeys, and would fight for only sorcerers.

Jujutsu Kaisen Season 2 Release Date & Everything We Need To Know

Abilities And Powers Of Suguru Geto In Jujutsu Kaisen

Gojo Satoru and Geto Suguru were said to be the strongest of all sorcerers and curse users and that is why they are put in special grades. Only 4 students have been in special grades till now so we can think of the power levels of those who are into it.

Let’s analyze the powers and abilities of Suguru Geto in the Jujutsu Kaisen series.

Suguru Goto was one of four special-grade sorcerers. He was considered the most dangerous curse user due to the dangers he presented to humanity.

Suguru and Satoru were considered the “strongest” students. Suguru could quickly defeat curse users who were experienced on multiple occasions.

His extensive collection of cursed spirits included many different abilities and roles. Suguru wasn’t too dependent on his curses, and he was also a skilled close-quarters fighter.

Suguru, a curse user, used his religious group to lure thousands of cursed spirits. He was a greater threat to humanity than any curse over the course of a decade.

Suguru was backed by thousands of curses, and many curse users, so he could declare war against Jujutsu High. This is the foundation of jujutsu.

Suguru knew that despite his wealth, he had little chance of defeating the Jujutsu High sorcerers. His strategic intelligence allowed him to trick them and isolate Yuta OKkotsu at school.

Night Parade of a Hundred Demons’ true purpose was to kill Yuta Okkotsu and take Rika Orimoto, a special-grade vengeful spirit. Suguru would have been successful if his curses had not been split between Shinjuku and Kyoto.

Most people who know Suguru assume that he will fight like a shikigami-user and let his cursed spirits attack him. Suguru uses this misconception to his advantage and surprises his opponents with his expert martial arts skills in hand–to–hand combat.

Suguru allowed an arm-wielding close user to approach him so he could pummel them with a combination of punches and palm strikes capable of knocking out their teeth and leaving them in a bloody mess.

He was able successfully to counter Yuta’s sword strikes as well as Rika’s physical attacks and kept both at bay with his masterful skill.

Suguru Geto was a brilliant student at Jujutsu High. Satoru used to forget important points given by Master Tengen and other details of their missions. Suguru would remember them and explain them to him.

Suguru’s intellect was always sharp and able to think ahead of his opponent. Suguru was able to surprise Toji Fushiguro in his fight against Toji Fushiguro for a brief moment.

Toji was able to move behind Suguru, knowing that his confidence would allow him to keep his guard down. He almost absorbed the inventory curse in an attempt to stop Toji from getting weapons.

This was due to Suguru’s unforeseen circumstances, which left him vulnerable to being exploited from close range.

Suguru became a curse user soon after. This created a base for cursed people to visit to seek exorcisms. He was able to collect thousands of curses using this method.

Suguru defeated the Jujutsu High sorcerer group thanks to a series of strategic moves and resources. Night Parade of a Hundred Demons declared war on Jujutsu High and lured all their sorcerers to Kyoto and Shinjuku.

Suguru, meanwhile, infiltrated Jujutsu High and took on Yuta Okkotsu. Although he knew he had a less than twenty percent chance of winning initially, he confidently calculated his win percentage by capturing Rika.

Why Is Geto Still Alive? (Spoilers)

Those who have watched the Jujutsu Kaisen 0 Movie, have their minds baffled by a mystery which is when Gojo killed Geto then how come he was alive in the sequel of the series Jujutsu Kaisen Season 1?

Well, many fans said that they never showed Gojo killing Geto and ended the movie. But as a manga reader let me tell you something.

Gojo did kill Geto at the end of the movie as told in the manga, and Geto died too. But then again the question arises that how was he alive. Then let’s get into this mystery.

After losing against Yuta and Rika in Jujutsu Kaisen 0, Suguru Geto is left mortally wounded. This was the moment Gojo arrived. He seemed to have had his last conversation with his friend, and he planned to kill him.

The reason we see Geto in the anime is that his body was implanted by an ancient sorcerer called Kenjaku. He acquired Geto’s body after Geto died. This made Kenjaku the real antagonist of Jujutsu Kaisen. This also led people to believe Geto was back to life. But our Gojo Sensei is super sharp and he realizes that he isn’t the real Geto.

Kenjaku was then able to reveal his true identity and came forward. It was a cursed technique that allowed him to switch brains between bodies. This ability allows Kenjaku the ability to gain the innate abilities of his body, allowing him to use Geto’s cursed manipulation.

Gojo decided not to take Geto’s body to Shoko in Jujutsu Tech after he had killed him. Kenjaku was able to get Geto’s body because the body hadn’t been properly disposed of.

Also, it was revealed that Kenjaku had taken over bodies for centuries including the Noritoshi Kamo ancestral, which allowed him to create Cursed Womb: Death Paintings.

This was exactly the reason why we can see stich marks in the forehead of Geto Suguru because of that cursed technique which allowed Kenjaku to switch brains between bodies.

That was all for our article on Geto Suguru in Jujutsu Kaisen. He is an exceptional and formidable foe to the sorcerers and a very powerful curse user.

I hope you got what you were looking for and let me know in the comments what your views are on whether Gojo is stronger or Geto.

How old is Geto Suguru?

Geto Suguru is 27 years old in the jujutsu kaisen series.