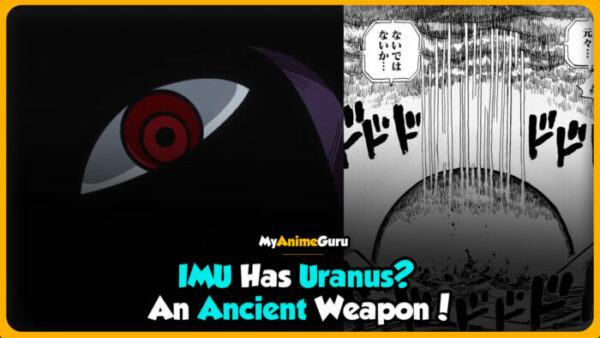 After Chapter 1060 of One Piece manga, many fans started speculating about the powers of Imu who is right now the leader of the world sitting on the empty throne.

Many fans said that it was a secret mythical devil fruit and some said it was a technique no other man in history alive knows other than Imu.

But what if, Imu used an ancient weapon to destroy the Lulusia Kingdom? I mean it’s a total possibility and that is what we are going to discuss today.

MyAnimeGuru brings you a fan theory of One Piece, clearing Does Imu Has Uranus? Let’s find out.

What Is An Ancient Weapon?

The Ancient Weapons can be considered powerful tools created in the Void Century. These weapons are believed to have been used in the war against 20 Kings, which eventually led to the creation of the World Government.

These weapons are weapons of mass destruction, and they have the potential to wipe out the entire planet. Oda revealed that the pluton was an aircraft warship. One shot was powerful enough to destroy entire islands and vaporize them with ease.

It was revealed that Poseidon was not a fictional character like the Pluton. She was a mermaid who had the ability to destroy the whole world. She could control the Sea Kings to swallow entire islands.

The Ancient Weapons are far more powerful than the Yonko and other legends from the One Piece universe. Like the other weapons, the Uranus is also a weapon for mass destruction.

This weapon can also be used to destroy entire countries and islands if desired. It is possible that this weapon could be the most fascinating of the three.

Oda left Uranus for it to be revealed at its end. Since the Void Century, ancient weapons have been sleeping. The Pluton is located beneath Wano Country, and Poseidon was just recently reborn.

Although Uranus‘ whereabouts are unknown at this time, it is a known fact that this weapon has not been made public to the rest of the world.

They decided to interview Kuma but before the former Warlord could answer their questions, the Transponder Snail began ringing. Koala quickly picked it up, believing it to be Sabo.

Sabo had called the Revolutionary Army to clear his name. Oda didn’t follow up on what happened afterward until chapter 1060.

The latest chapter revealed that Sabo was actually on Lulusia Island. The islanders had revolted against King Seki, and they threw him and his wife into jail. It was the ideal place for Sabo, as the nation was in turmoil.

The Navy was able to locate Sabo and reveal his location to the Five Elders. Sabo stated in his call to Dragon that he wasn’t responsible for Nefertari Cobra’s death. Sabo spoke about the mystery surrounding the Empty Throne in addition to these details.

Dragon was told by Sabo that the empty throne was actually occupied, even though it was supposed to be empty. He said this because he is the King of the World. The entire island was destroyed before Sabo could tell anything more.

Imu’s power is clearly linked to the destruction of the Lulusia kingdom. The question now is how much power he could have. Imu was seen walking up to a map just before the island was destroyed.

Soon after, Imu made a cross on the map and a shadow appeared at the top of the island. A huge ball fell from the sky and decimated the entire island.

The residents of Lulusia Kingdom looked terrified moments before the impact. Sabo also seemed petrified. It is possible that Imu may have an overpowered devil fruit. However, it is more likely that Imu has Uranus, an Ancient Weapon.

Who Is Imu In One Piece? Explained

The Uranus is an ancient weapon that has incredible power. Uranus, according to Greek mythology is the personification of the sky. The Pluton, a warship that can be used to rule over lands, is already well-known to fans.

Poseidon is also the ruler of the seas, as the Sea Kings can all destroy the whole world. Thus, Uranus would be the ruler over the skies.

This weapon would be capable of flying and could potentially destroy the entire world from the top. Similar technology was used by Imu to destroy the Lulusia Kingdom in One Piece1060.

Imu simply knew Sabo’s exact location and marked an X on the country map. Soon after, Imu saw a huge shadow on the island.

This indicated that something was above the island. Imu shot several rays from the cloudy sky that destroyed the entire island and wiped it off the face of the Earth. This could be Uranus. The Uranus looks like an airship.

It is interesting to consider why Oda chose Uranus over Zeus or Jupiter. However, it could also be because Uranus was the first supreme ruler in the world.

Kronos overthrew Uranus’ son and he remained the ruler. Uranus was the grandfather of the six Olympians and the father of the first 12 Titans.

He is a legend in Greek mythology. If Imu was actually Uranus who destroyed Lulusia Island, it would explain why God Valley mysteriously vanished from the map.

This is one of the clear proofs that Imu has Uranus.

Everything You Need To Know About Luffy Gear 5

Vivi Is The Key To Uranus: Theories Supporting Imu Has Uranus

A Reddit user posted his fan theory which seems pretty much convincing. So, I thought it is worth mentioning here.

Thus, these all clues indicate only one thing that Imu has Uranus.

Final Words: Does Imu Have Uranus?

From the looks of it and what we have discussed till now, the theory seems pretty much convincing and I personally believe that it would make sense. Possession of such a powerful weapon in the hands of such a powerful man, if not the strongest man in One Piece.

Thus, we can say that Imu has Uranus. That was all for our article on Imu Has Uranus? I hope you liked the article and let me know in the comments what you think.