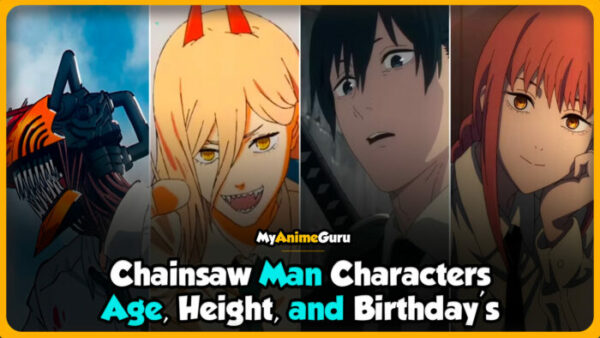 Chainsaw Man is gaining popularity more and more in the past year due to the anime adaptation. While we know much less about the series (not manga guys), we know even less about the characters.

So, MyAnimeGuru brings you the Age, Height, and Birthday of Chainsaw Man’s every main character. Data has been curated from verified sources so you need not worry about anything.

Let’s start the article without any further ado.

Let’s dive into detail with a little explanation of these characters.

Denji is 16 years old in anime and 17 years old in manga because anime is yet to catch up to the latest manga chapters.

Denji is the main protagonist of the Chainsaw Man series and is also known as the Chainsaw Devil. He was introduced as an extremely poor character who sells his organs and eats cigarettes or waste as food.

He has a pet Pochita who was actually the chainsaw devil, but due to an incident (avoiding spoilers), he became one with it and became Chainsaw Devil.

Why is the Chainsaw Devil so strong? Reason Explained

Makima is around 22-25 years old as her age is undisclosed even in the manga.

Makima is a very fascinating character in the series and everybody has suspicions about her motives and who she really is.

I don’t want to give spoilers for non-manga readers although manga readers have a clear picture of her. She is manipulative as hell and get’s her work done by seducing her underlings.

Power is 16-17 years old. But keep that in mind, I am talking about the corpse and not the fiend.

Power is an interesting character in the chainsaw man series because she is a fiend. Fiends take over corpses and live in them and she is also the Blood Devil.

Her nature is truly egoistic, dangerous, and most important childish. She was paired up with Denji to work for Public Safety Bureau.

Kishibe is in his 50s and quite an old character in the chainsaw man series.

Kishibe is the Head of the Tokyo Special Division Unit working for the Public Safety Bureau. He is the best devil hunter yet known and also trains Denji and Power to use their abilities to the fullest.

He has been through a lot in his past during his service as a Devil Hunter and became cold-hearted so that he doesn’t feel pain or emotions. He is a badass.

Reze is a special agent of the Soviet Union who was sent to steal Denji’s heart as it is very precious to everyone in the series.

Despite being the bomb devil and an enemy of Denji, she is extremely kind and helps Denji to live his life having fun. Although it was an act to get closer to him, she later grew accustomed to Denji.

Who Is Reze In Chainsaw Man? Powers, Abilities and More

Quanxi is possibly 30-50 years old as her age is still kept in dark even in the manga. (Let me know in the comments if you have any hints.)

Quanxi is known as the first devil hunter in the manga and is employed by the Chinese govt. for the same task as Reze. She is also the Crossbow Devil. You can read more about Quanxi in the post mentioned below.

Who is Quanxi in Chainsaw Man? Read More

Aki Hayakawa is anywhere between 19-21 years old and is 5’9 inches tall.

Aki Hayakawa is introduced as the caretaker for both Denji and Power as he let them live in his apartment.

He has a very strong personality and has a popularity rank of 2 among all the characters of chainsaw man. Fans love his silent and confident personality.

He has contracts with Fox and Future Devil in the anime but we have much more to see in the manga.

She is a former public safety agent from Makima’s experimental squad. She resigned after a particular incident that we won’t discuss for the sake of spoilers.

She has a very depressing, afraid, and underconfident personality. But when she is serious, she is a very dangerous devil hunter who single-handedly manhandled sword devil, and snake.

Himeno is around 40 years old.

She was the mentor of Aki Hayakawa when he joined the Public Safety Bureau. She is known to lose all her partners until Aki came into her care.

She has clear feelings for Aki and died in order to protect him from the sword devil. Himeno has an interesting but very bold personality sometimes resulting in awkward incidents.

That was all for our article on Chainsaw Man every main character’s Age, Height, and Birthday. I hope you liked the article and share it with your friends.

Let me know in the comments how you feel and also you can follow us on social media too.

How old is Denji in chainsaw man?

How old is Power in chainsaw man?

The age of power is unknown as she is a fiend but the age of the body of the blood devil she took on is around 17 years.

How old is Aki Hayakawa?

Aki Hayakawa is around 20 years old.

How old is Makima?

Makima is around 25 years old as she is clearly working before Aki.