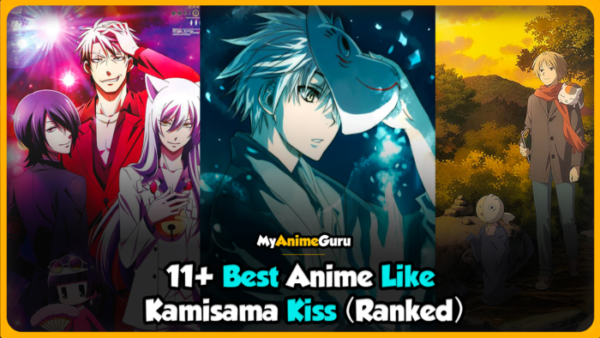 Kamisama Kiss is a unique anime that is quite enjoyable. It shows us the concept of gods and Japanese mythology which is interesting.

That is why MyAnimeGuru brings you the list of 11+ Best Anime Like Kamisama Kiss (Ranked). Of course, this list is going to be ranked based on anime ratings.

So, without wasting any more time let’s get started with our list of best anime like Kamisama Kiss.

These are all the titles I have chosen for our list of best anime like Kamisama Kiss. Let us discuss why these titles fit perfectly into this list.

1. To The Forest Of Firefly Lights

A young girl, Hotaru Meet is lost in the forest and encounters an entity named Gin. However, there’s a problem. Gin is unable to touch humans, or Gin disappears.

But, Gin helps Hotaru out of the forest, and Hotaru returns to visit him each summer.

The tragic romance of the two because they could not connect all the time, yet they still fell in love will captivate you.

The pace of this story is just right and in only forty minutes, the writers did great work. Animation and sound enhance the greatness of this show.

I would only say that watch this even if you are not in this genre. Just watch this amazing anime like Kamisama Kiss.

Maid Sama is a great choice for people who are new to the genre. The anime received lots of attention because it has characters that have unique simple personalities, and the plot is quite good.

Many viewers might be skeptical of Maid Sama because many romances are thought to be just relationship issues that involve the partner or girlfriend but in this show, characters are trying to be more friendly with coworkers and guys.

If I could give this a rating of 10 I would give it 10/10. I love this Anime! It is a great mixture of teen romance, fun characters, as well as the usual Highschool drama that goes with it.

I would recommend it to anyone seeking that unique kind of build-up love anime like Kamisama Kiss.

The show always gives me a sense of satisfaction but also emptiness. Wonderful story and amazing characters, accompanied by warm and uplifting music.

If you’re in search of a great anime like Kamisama Kiss to watch, this is the one for you. As it’s its first season, it’s still to grow stronger, and not that it’s lacking one at all.

Through a variety of stories, this anime covers a variety of subjects about our emotions and leaves us with a warm sensation in our hearts.

These are touching scenes and great growth. You should give it the chance!

This anime is simply amazing! The majority of things are symbolic of almost everything is symbolic for something.

They are all connected and symbolic of one another. Yato is an amazing character. I loved his development as a character and also when he was serious.

Particularly during certain occasions, like: “Even If Life Is difficult and painful It is important to appreciate The Meaning Of Being Living All The Time“

A well-made and simple animation of finding a home in the most unlikely places. I was looking for an adventure, and I found something fun and healthy that I never thought I would need.

But was very much valued in these turbulent times. I am anticipating the coming season if it ever comes out!

A minor thing I was not a fan of was that I saw very little progress in the plot to the very end. It was enjoyable and well-developed.

However, I was hoping to know more about the relationship between leads. I love this series. It reminds me of Kamisama Kiss, but with a culinary twist and some comedy.

I love the determination of the main female character. Although there’s not much conflict in the overall love story.

However, I feel there’s enough tension in the other aspects of the plot that keeps me interested in this anime like Kamisama Kiss.

Outstanding show, every aspect of this show is perfect, story/art/sound/character/enjoyment everything is right on the spot.

You will remember scenes from this anime for a long time and when u hear some after a long time you will feel like someone strangles your heart and then warmness.

One of the best anime like Kamisama Kiss that I have ever seen ( my personal opinion of course ). You won’t regret it when you are looking for a happy or sad show.

Fruits Basket is an amazing and moving tale that I am lucky enough to have seen through a close friend.

The animation is simply amazing it touches the chords in my heart. I laughed, I cried and I was genuinely moved by each character.

This is an incredible anime that I adored. !!!! for its artistic work and voice acting and everything. They have a wonderful plot that is easy to follow and yet intriguing.

It’s one of the few shows with a unique style that is not seen often and is planned impressively. I recommend this amazing anime like Kamisama Kiss.

It is filled with sad, happy, dramatic … etc moments that make you want to keep watching every episode. They do a good job at playing their voices and it is a perfect fit for the character.

The final scene of the show was truly amazing and made me wish to cheer and applaud and so on but in the end.

This was an incredible show and I’m sure that anyone who sees it will enjoy it as much as I enjoyed it. It was, in essence, an incredible drama comedy that had an edgy touch of action.

A grueling story of love triangles, humans, and demons who hold your tongue to another. It’s a show you’ll be looking forward to finding out what happens if Mirouku gets smashed with Sango.

An anime that doesn’t drag on for hours as other anime (*cough* Dragon Ball *cough*) however it still keeps you guessing.

There’s action, a few romance scenes, and nothing offensive. I’m only annoyed at the twists in the plot and the reality that it’s going to end in The Final Chapter. I think I should, “Sit.”

The story is a bit long in episodes 100-150. But stay there! There are some amazing fight and love sequences in the finale that you don’t want to skip.

This is by far one of the best anime like Kamisama Kiss that I’ve ever watched. Every character was enjoyable and loved, particularly Kohina and her doll personality which was quite distinct.

The humor was fantastic too and, although they were rather dark, it was able to blend in with the occasional touching moments and not make them appear unimportant.

The opening was flawless, and the closing song was equally cute and sweet. I’m not sure I could identify anything in it that I didn’t like.

Apart from the fact that I think it could be more enjoyable if it took on more manga and lasted longer.

Meet Kyoya. He’s a prince because the beauty of his looks is breathtaking and is adored by the majority of women and a perfect definition of a man, thus earning his title.

He’s an African-American prince because he’s sadistic with pure evil. Meet Erika. She’s not the perfect example of a goddess, but she’s not terrible either.

It’s just your typical high school student who works to be a part of the crowd and is a little too much to the point of creating a huge pit of lies that she could not get out of.

She then was introduced to the black prince and was given the nickname, Wolf Girl. I like this anime like Kamisama Kiss. The plot is not unique, but it’s easy to relate to.

After watching the first episode, I was captivated. I couldn’t end my watching until I was unable to watch anymore.

It ripped me apart when I was forced to wait one day, to watch the final episode. After I had finished the anime, I knew it was going to be among my top ten favorite anime.

The plot was amazing. It was a normal life for a girl without all the supernatural power and gods. The animation was fantastic!

I don’t like watching a show with poor Animation, yet this was enjoyable to take in. It was pleasing to my eyes.

The sound effects were in line with the storyline of the show and the characters were unique in their ways.

I loved it to the core. This was an emotional and heartfelt anime that made you feel. This was a calm and serene show, captivating that it left the viewer wanting to know more.

The characters are adorable The art is gorgeous. Sometimes, a few things happened that were rushed.

While other events not as crucial appeared to have taken some time, however, it wasn’t enough of a matter to me to declare it was a problem for me.

I watched the anime in dubbed and I think they have picked an excellent ensemble for the characters, especially the main one. I also enjoyed the opening and closing.

Particularly, I liked how you watched the main character’s appearance change slowly and change throughout the entire anime, not just in one episode.

I would suggest that anyone who loves beautiful artwork, spirits, and some passion for the arts should give this anime the chance.

I hope you got something to watch next because we have reached the end of our list of best anime like Kamisama Kiss. Let us know in the comments which one you have selected.

You can also talk to us on social media by sending us a message there.